Sat 22nd June.
Marseille and the end of my time in France.

The site was made by the people who worked there, out of repurposed materials (a positive recurring trend in a green-aware planet). It was pleasant, well done, strongly built and a great use of an otherwise ignored space.
It was there for the summer and if it was successful it may return in the following years. They had a list of events, gigs and screenings throughout the summer. The first night they had bands playing till late and on the second night they screened ‘The Rocky Horror Pictureshow’ as part of a collaboration with a local theatre group.
There was a bar, a kitchen and an outdoor dining area. It was very pleasant and a welcome break from being on the road. The staff there were fun and enjoyed what they were doing. The first night I had a bed in the purpose-built cabin (I’m not sure what you should call it), the second night I was camping (rather unsuccessfully) on a raised wooden stage they had on the floor.

On the first night there, I got invited into town. Marseille had been labelled the European capital of culture for the year and the city was basking in its glory by throwing a weekend of parties as part of an ongoing festival.
I could’ve got the boat in, but no-one was sure which bus would bring us back. Given the uncertainty, I played it safe, had a beer on the site and got to know some of the diverse range of people there.

The campsite was listed on some accommodation website and was the cheapest option, so it attracted a lot of travellers hunting the cheap option. In my pod (each pod could house about eight people) there were three American girls on the first night and more came the next day. All of them were backpacking around Europe. 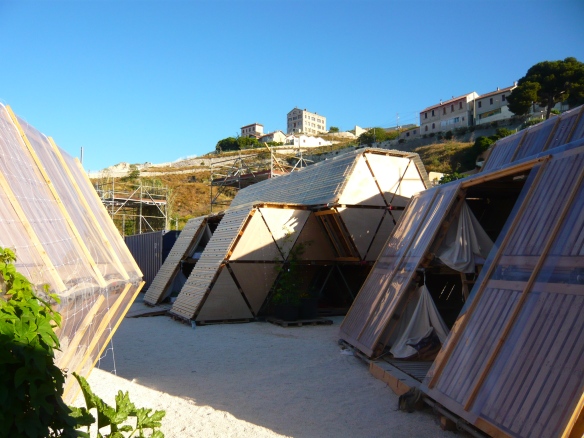 The Pod (or dorms?) made of palettes, perspex and scaffolding. 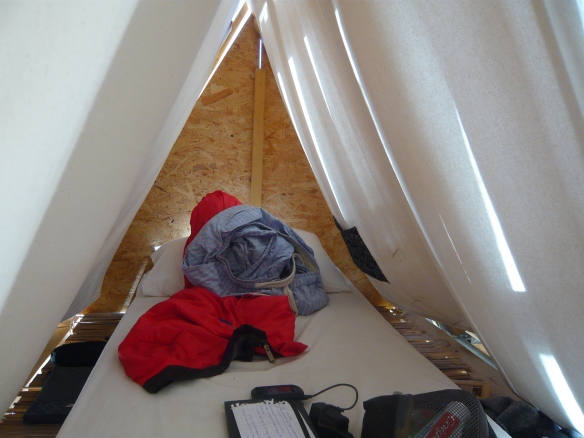 Getting into Marseille on the bike was no easy task, as there’s one main flyover road for cars that goes directly into the city and very little for anything else. I took a route involved going up through narrow awkward streets, making my way on back roads through small, dislocated suburbs.
In the city, it was a heavy mix of people and cars densely packed together on small roads with markets over-flowing into the road.
It was a culturally diverse place and to be honest I don’t recall seeing many white French people at one time. The diversity was comforting and felt like being at home in London from time to time, but like in Paris the fusion didn’t seem to be natural as it is in other multi-cultural cities and the tension was evident. My gut feeling (as in Paris) was that immigrants had a hard time here and possibilities for integration were fewer here, resulting in cultures sticking together for support.

At one point, stuck in traffic I weaved through the cars and saw an arm reaching out of the car window to pick-up study a pair of flip-flops from the market stall, cutting me off as I made my way through. There was plenty of shouting and commotion all over. It was unlike anything I’d witnessed on a bike in terms of density and after this stretch of road I dismounted.
It wasn’t a pleasant place to be and this entry-point to the city ruined any positive vision of the place that I may acquire later.

Eager to get down to business, I went to the station and enquired about travelling to Geneva the following day. Tickets were around €80 which was more than I’d hoped. I asked at the bus offices at the station but they didn’t go near there, so by train was my only option.
At the time this was troubling given that it was still relatively early days in the trip and I was on a budget. But when I thought about it, cycling up there (already fatigued), I would miss my friend as it would take at the very least four days and there was the cost of cycle-travelling.
I soon realised €80 was reasonable. I enquired about taking a bike, left the station, then looked around the city to try to find something I did like. The harbour was nice with its outdoor restaurants, but none of this was for me and I headed back. 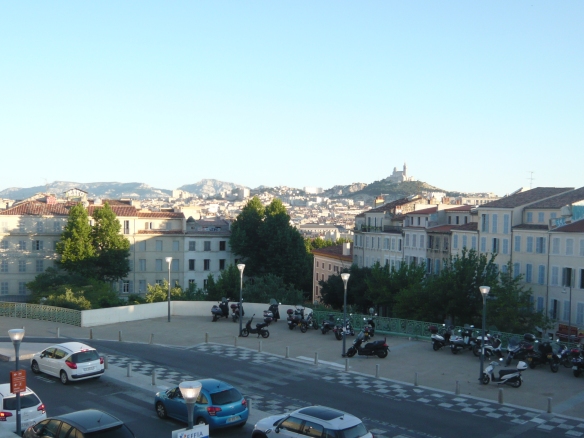 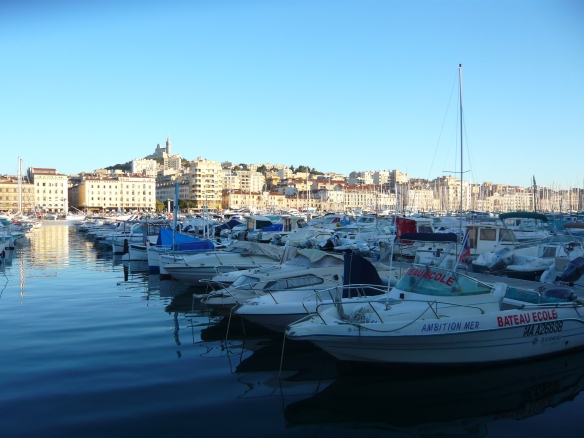 Back through the awkward, unloved suburbs, I stopped off at a boulangerie to stock up. They sold day-old ‘Pain au Chocolat’ at a fraction of their normal price. I got a bag and got talking to the owner who was of a Middle Eastern origin. His English was exceptional and he casually asked about what I was doing. I returned the questions and he told me he lived in the States where he had his own business. Enlightened by the unlikely history of the boulangerie owner, I headed back while the sunset, in a better state of mind and watched the sky turn pink at the campsite.