There weren’t many mosquitoes in the morning, which allowed me to get away without much trouble. I had collected a lot of bites from choosing to stay on a bad patch combined with the ones I already had. As the heat was picking up, the bites were becoming more frequent and given that it was the middle of July, it wasn’t surprising.
My right eye felt strange in the morning. I took a photo to inspect it (not having a mirror), the result being that my eye had swollen up all around from a bite in the corner. It looked like I had been punched in the eye and it had bruised badly. I kept my sunglasses on for the entire day, especially in shops where I looked shifty. Wearing glasses indoors made me nervous as it’s a stupid thing to do unless necessary, which I felt it was.

The first town on the lake was Überlingen. My first impression of it was a bizarre waterfall made of concrete on the promenade. It featured two topless mermaids with large breasts lying on their backs, holding a plinth up with their tails that was about 9feet high. The plinth housed a man on horseback. Overlooking this delightful scene was an old mermaid woman, whom age had not been kind to. She was naked and had her right palm raised in a sign of knowledge or peace.

No one seemed at perplexed by this strange monument as it was part of the furniture here, depicting a mixture of mythical beings and perhaps a local hero sculpted in a realistic impression. All in a typically German way, their brutal honesty when it comes to raw form. Nothing was sugar coated.

Aside from the fountain, the lake was wide and inviting with Switzerland on the other side. There were plenty of people out enjoying themselves, swimming, diving and sunbathing. As lakes are the closest things Germans have to a serviceable beach, they always proved to be popular destinations.
I fancied going in, but didn’t want to risk leaving the bike unattended. Instead I stopped and looked hopefully into the water, trying to take something from it. I probably looked odd compared to the general populace, who were mostly semi-nude and out enjoying the sun. 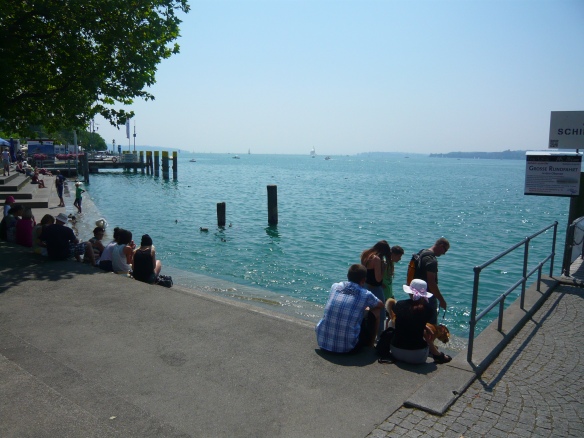 Tobias was my host for the night. He had kindly offered to put me up as his wife and daughter were away, as long as I could get there by today. He lived near Lindau, which was on the east end of the lake 60km away. Achievable, providing nothing went wrong.
The days cycle went well, permitting me to take more breaks then I should have and resulting in my getting there later than anticipated.
He’d gone out for a conference and wouldn’t be back for a while, but left a note, explaining where the key was and to let myself in and help myself to anything I needed.
I looked forward to a good nights rest as this would be the first time in five nights I had access to a bed. Given that my mattress was broken, it was much-needed.