After a night in the wrath and fury of nature, the morning was unnaturally calm. Natures way of apologising for its tantrum the night before. The sun was out, birds were singing and it was calm. The only benefit of the heat was that my stuff would be dry by midday, other than that I knew I would probably be in for a stuffy day of riding.

I picked up a coffee and checked the internet before getting on the long road that would take me out of Bellinzona. I met some while getting coffee that spoke mostly Italian. Two of them asked were I was going, when I said Lugano the man laughed and made an up and down gesture with his hands. “Great, more damn hills” I thought. As I was still in Switzerland I’d come to expect it.
My friend who studied in Lucerne (Rebecca) spoke highly of Lugano, praising it as her favourite place, which gave me something to look forward to.

Given that I had broken a spoke I was trying to take it easy on the bike, not go to fast and not take many bumps or drop off curbs whenever I could help it. despite my best efforts, another spoke broke on another winding descent.
I thought about the weight the bike was carrying and the speeds I was doing. Quite often I would study the bike when I stopped for food, looking at the bone thin structure of the frame and wheels from the back, considering that was supporting all for panniers, a rack full of stuff and me on top it was quite an incredible feat of engineering that I never tired of admiring.
I’d say 80% of the weight of the bike was on the back wheel when I was sat down. With the majority of the weight on the back-wheel, this was undoubtedly the cause of the broken spokes.

I went through some congestion in the outskirts of Lugano, then made it down into the city, joining another lake on the promenade. I had a host in Como and had a number to contact them on in case anything went wrong. I took an hour off and looked around the city, hunting for the magic that made my friend Rebecca so fond of it. 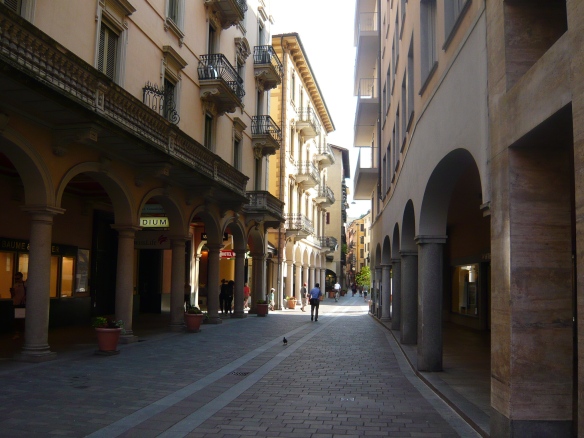 The were a lot of large blue sculptures adorning the path that were part of a festival, as well as plenty of sculptures in the parks. It had a very Italian/Hispanic feel, designed to withstand hot heat in the summer in an Italian style decor.
I had always wanted to visit Italy since I was young, something about its beautiful imagery from films and postcards always appealed to me. This deepened over the years through books, the European food world hailing it as its Mecca and authors and film-makers all sharing an Italian route and humour.
I didn’t want to rush there as the scenery here was also different and unique. The lakes home to the tropical hue present in all its other lakes. A colour associated with the finest purity laws and high standards. Perhaps they used an additive to make it look so appealing.

With a final push the last Swiss city I came to was Chiasso. It was quite run-down compared to other places in Switzerland. I spent the last of my Swiss coins on Kinder chocolates (that melted with an hour) and passed the border into Italy.
Passing through the town I could already smell wafts of Italian meals in preparation. Thick sauce aromas filled the streets only minutes after crossing the border.
The Italians had the same habits as the Swiss when building the most unpleasant roads imaginable. After getting off to push and some ugly climbs I had a rapid descend and was ejected onto the infamous Lake Como. 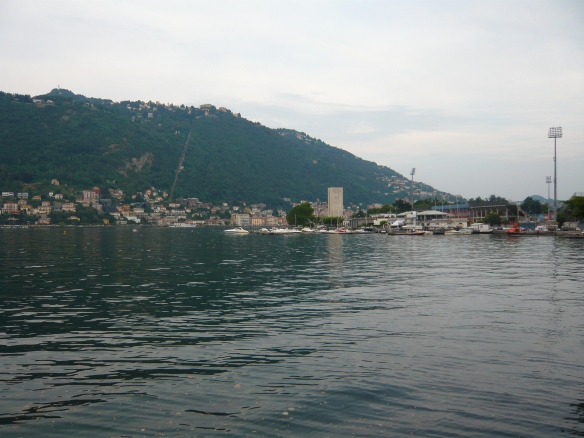 The first thing I noticed where cobbled pavements and a Romantic style handrail following the edge of the lake. In some naive manner it already lived up to my expectations of being Italian and once again I took in the feeling of experiencing the world by bike.
A plane came flying in and landed on the lake and slowly made its way over to the warehouse with a sign overhead reading ‘Flying School’. It felt like I was in a James Bond film, tall green mountains all-around, Italian lakes and white planes landing on water. I was looking forward to my time here.
I had received several texts from my host Rita asking of my whereabouts, the second simply reading, “The Pasta is ready!!!”.
I was in Italy, in a new city, with a families hospitality for a few days and a bed for the night. Nothing could have made me happier.

I cycled through the city to find them, I found the road I needed to be on and as I did I heard my name being called from above. I looked up and saw man and a girl my age calling my name, smiling and waving. A pleasant introduction.
They met me at the door, hauled me in and left the bike in the courtyard. I had a quick shower then greeted them and sat down for my first authentic, three course Italian meal. I melted.